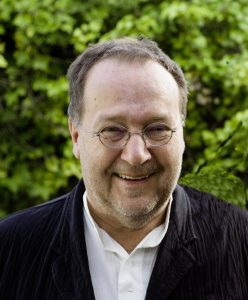 Michael Erlhoff was a German design expert, art theoretician and versatile author/writer. In 1991, he was appointed Founding Dean of the Koeln International School of Design in Cologne where he taught design history and design theory until 2013. Since 2016, he was an Honorary Professor at the Braunschweig University of Art/HBK Braunschweig.

Michael Erlhoff studied at the University of Hanover (Germany), where he completed his PhD in German Literature and Sociology. During his studies he also worked as assistant producer at the Staatstheater Hannover.

He worked for several years as research assistant at the University of Hanover, together with Uta Brandes he published the magazine ‘zweitschrift’; he was editor-in-chief of the art magazine K; he published, among other things, an annual Kurt Schwitters Almanach for more than ten years and he was a member of the advisory committee for documenta 8 (1985-1987).

From 1985 to 1990, he was director of the German Design Council in Frankfurt am Main.

In 1991, he was appointed Founding Dean of the Koeln International School of Design in Cologne where he taught design history and design theory until 2013. He also served as Dean of the Department for Cultural Studies at the Cologne University of Applied Arts (2002-2006). In 1997, he was a guest professor at the Hong Kong Polytechnic University. Since 2016, he has been an Honorary Professor at the Braunschweig University of Art/HBK Braunschweig.

From 1990 to 2001, he was the president of the Raymond Loewy Foundation (Germany and International), which was founded on a concept developed by him. Together with Uta Brandes he organised the St. Moritz Design Summit (2000 – 2006).

He was a founding member of the German Association for Design Theory and Research/DGTF, a member of the international Gender Design Network/iGDN and of AICA (association international des critique d’art). He regularly gave guest lectures and run workshops at international universities (e.g. in Tokyo, Nagoya, Fukuoka, Hangzhou, Shanghai, Taipei, Hong Kong and New York).

Michael Erlhoff was also a frequent member of national or international design juries.