The Rubber Cup goes back to Richard Sapper, then-professor at the Stuttgart Academy of Art: students from all universities were invited to participate in this race on the condition that their vehicles were powered by nothing but 20g of rubber.

This usually resulted in rather big vehicles as the tension of the rubber was supposed to generate the speed of movement so that the vehicles would either be rather fast or would run over a long period of time. The Köln International School of Design (KISD) also set up a project to participate in the race. After many attempts to power the vehicle through the tension of the rubber, a totally different concept was developed: the rubber was cut into small pieces, set on fire and the heat of combustion was used to power a very small vehicle.

The KISD vehicle won the race against many competitors because it was clearly the fastest. 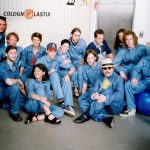